“Before I leave America I must see you again—there is no one in this wide great world of America whom I love and honor so much.”

Together We Write Private Cathedrals is a letter (and other things) writing game for two players. In it you take on the roles of two lovers at some point in history. You are asked to tell the story of your love through bits of writing and despite the fact that you cannot be always be open or explicit.

This game deals with how we view and understand queer history, by asking the player to write a version of that history. It takes 1 six-sided die, a deck of standard playing cards, and materials to write with. It is an asynchronous writing game  is based on the work of Takuma Okada.

If the cost of this game is a burden to you you can reach me at benaudenroswell@gmail.com or on twitter at @roswellwrites and I will provide you download code no questions asked.

In order to download this game you must purchase it at or above the minimum price of $5 USD. You will get access to the following files:

Support this game at or above a special price point to receive something exclusive.

A physical version of this game. PDF and Text downloads are included.

Fulfillment begins the week of September 16th and will run until there are no more zines! Please provide your address in the spot provided.

If the cost of this game is a burden to you for any reason, you can reach me at benaudenroswell@gmail.com or on twitter at @roswellwrites and I will get you a copy.

The price of a physical Private Cathedrals Zine plus the cost of international media shipping. Please provide your address in the spot provided.

If the cost of this game is a burden to you for any reason, you can reach me at benaudenroswell@gmail.com or on twitter at @roswellwrites and I will get you a copy.

We finally made it! We community-sourced the download of Private Cathedrals and is absolutely brilliant and beautiful. Thank you for creating this. We hope to someday share our writings with you. Our love.

Hey... i really love the use of asynchronicity as a feature and not just some inconvenience that needs to be worked around, also such an interesting setting/theme

Thats such a cool hack idea! Im excited to see it.

Just reading the description and screenshot churned my stomach. Thank you for making this, it has the potential to be a fierce educational tool.

i am a bit confused. i thought - knowing / reading the description - that it is a game you download to play.
But the only thing I recieved are rules to play
It leaves me with the following questions:

- If not in the game, where should I play?

- Where to find a partner to play?

- last but not least: how does the game end?

Do not get me wrong, I love the idea behind it, but from the point of the player/ potential buyer, it is really confusing

Please do not get angry with me, I am just confused and frustrated that this great concept is left without enough info to start exploring it's potential

it's a tabletop game, so you don't play on something downloaded. follow the rules to play the game wherever you like, with whoever wants to play with you. i havent downloaded it yet so i dont know about endings, but i'd suspect it's when you feel like finishing

-Play wherever you want, in a lake, a ship, a home, a box, as long as you are writing letters to a partner / conversing with a partner as if you were its fine.

-Anywhere, as long as the partner is human. Try reddit.

-When it reaches it's natural narrative conclusion, when does a film end? when does a book end? When it's reached an appropriate narrative finale, or maybe never, if you prefer.

This is a TTRPG (tabletop role-playing game), you play through real correspondance. As for if it is really left without enough info, the rules were really written for someone familiar with such games already, so its more just not enough for you, not its target audience (not to say you shouldn't play).

It is also in the "physical games section" on the store, so its not abnormal to be downloadable rules/books not a program. But its understandable that this is confusing to you.

A program is merely one way of experiencing a story or game, equally it can be done through a board, through conversation, through letters, or even through reading something on your own. 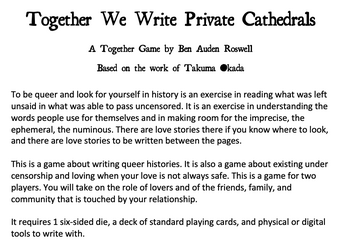 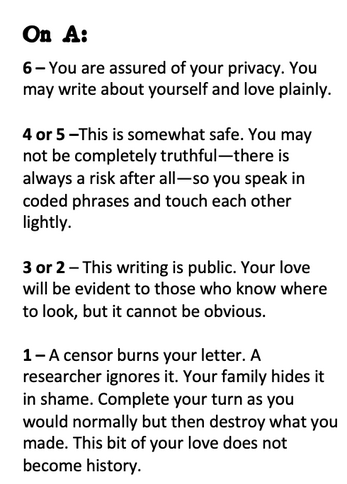