In a fight to the death, all that matters is the blade in your hand.  There is only winning or dying. There is nothing in between.

Behemoth and Killer is a lyric fighting game, written in the legacy of Monster Hunter and Horizon Zero Dawn. It is about fighting monsters bigger and more dangerous and yourself, it is also about protecting yourself and weighing the cost of your actions.

It is inspired both by lyric games and by the ORS. It works for one or more players and require an oracle deck and ten or more 6-sided die.

I created simplifed fork of your game (I haven't playtested it yet). It has no narrative elements, it's just a fight between solo player and a beast with 4 body parts (I named them "paws"). The player has 3 weapons. HP of the Player is 6. The players wins if they are alive, but the beast is dead. The player loses if the player dies. The player dies if all their weapons are destroyed and/or their HP equal or less than zero. The beast dies if each of their paws is destroyed. If both the player and the beast die, then it's considered that the game was lost. A weapon/paw is considered to be destroyed when its HP is equal or less than zero.

A game to fight big monsters, in open way. The oracle (that can be anything) is pretty much the most important thing of the game, which can be adapted to many settings. The fight system is elegant, with dice manipulation. A good read! 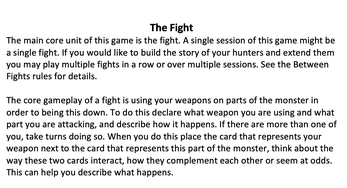